One place on the South Downs that will always have a special place in my heart is Blackcap near Lewes. As an undergraduate at Plumpton College I wrote a couple of essays on the hill and it’s a place I return to again and again. The clump of trees on top of the hill can be seen for many miles – even from many parts of the High Weald – but despite looking like a black cap, it is not from these trees that the hill gets its name. Where the hill does get its name, on the other hand, is a matter of some debate.

Between the 13th and 17th Centuries the hill was known as Mount Harry, as this is the hill where Henry III stationed his troops before the battle of Lewes in 1264 – a battle that ended with both Henry and his son, the future Edward I, being taken prisoner by Simon de Montfort.  The hill to its east was known as Lewes Beacon and, indeed, it has a beacon on it. For some reason, though, in the 17th century Mount Harry became Blackcap and Lewes Beacon became Mount Harry. No-one really knows why. There was, in that period, a windmill on the saddle between the two hills known as Blackcap Mill, but whether it was named after the hill or vice versa is not known. One thing is certain, though, and that’s that the trees on the very top of the hill were first planted for the coronation of Victoria some 200 years later (they have died and been replaced twice since), so it’s definitely not named after them.

The top of the hill is managed by the National Trust and has been the successful subject of a scheme to regenerate the herb-rich grassland that makes the Downs famous – much of the hill having previously been ploughed up during the Second World War. The large open expanse of the hill affords wonderful views over to the coastal line of the Downs that stretches from Brighton to Eastbourne and in the summer it has one of the finest displays of wild orchids on these hills.

This is a hill that never fails to cheer me up. A network of bostalls scores its northern face, which allows the wanderer to assault it from various directions, or combine it with a walk in the woods and fields of the Low Weald at its feet. 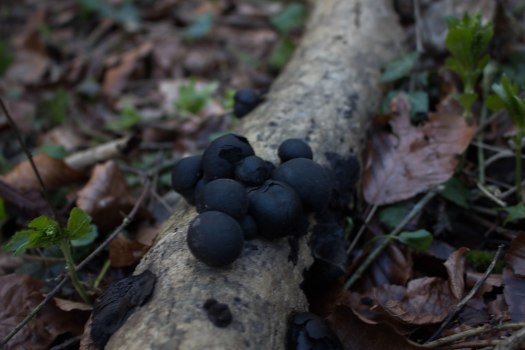 On my way up the hill today I spotted these King Alfred’s Cakes growing on a dead ash branch. The fungus gets its name, of course, from looking like burnt cakes, such as those supposedly neglected by King Alfred the Great while his mind was on other vaguely important things, like all those pesky Danes that were suddenly cluttering Wessex up. They only grow on dead ash and though they are extremely hard, they can be removed with a knife. Once they have been sliced off and the interior revealed, it can be seen that they have growth rings, just like the trees they grow on, which gives them their Latin name of Daldinia concentrica.

Long before the days of Alfred and his cakes, this fungus had another use. If a spark from a fire were blown onto the inner rings, it would smoulder quite slowly and happily away, even for days, until a new fire was to be set, at which point the addition of some dry tinder – and a fair amount of highly controlled blowing – would bring it back into a bright blaze. A very useful property in the days before we’d worked out how to make fire for ourselves and had to rely on its delivery from the Gods.

With the ash trees all dying of the Chalara fungus, they look set to have a bumper couple of decades, as there’s going to be plenty of dead ash for them to grow on. But after that, I suppose they’ll die out with their hosts. A sad end to such a wonderful part of our human past.

View across the Weald from Blackcap on the South Downs

Towards Brighton from Blackcap