To the east of Croatia’s Istrian peninsula there lies, amid the deep blue of the Adriatic, an island called Cres (pronounced “Tres”), which my travelling companion has on good authority is “amazing”. And it is thus that we find ourselves stepping down from the Pula – Zagreb coach onto the roadside in tiny Zagore, the sun beating down as we shoulder our packs, slather ourselves in cheap Lidl suncream and start the walk to Brestova to catch the ferry. Of course there’s no public transport to the ferry terminal, so the only option is to walk and we are carrying all of our camping equipment and a fair amount of food and water on our backs. The plan is to catch the ferry to Porozina and walk over the island to Beli where there is a campsite. We’re not sure if we’ll have time to make the whole walk before dark and the suggestion of wild-camping on the way is in the air.

The afternoon sun is hot as we walk down the steeply winding road to Brestova. Occasional cars – German and Italian mostly – sweep past us as we plod on and a coral blue/green snake slithers its way up a nearly sheer cliff-face beside the road as I walk past, small shards of rock tinkling to the ground as it goes. After 45 minutes we make it to the ferry terminal in time for a cooling radler (a kind of shandy made with cloudy lemonade and other flavours like grapefruit. We should do more of this kind of thing in the UK) at the terminal buffet while we wait for the boat. When the boat arrives we troop on, the only backpackers, with a few other foot passengers and go up into the main interior seating area where a lounging steward looks at us in surprise. “Hello” he says, a little gruffly. “Hello” I respond. He looks in askance, an expansive gesture asking the question “What are you doing here?”. “We just got on” I venture. “Ay, ay, ay…” comes the response. We leave and go up to the deck to sit on the rows of seats in the sun for the twenty minute journey to Porozina. Soon the seats fill up, once the cars have come on board and disgorged their passengers and the boat makes its way across the strait to Cres. 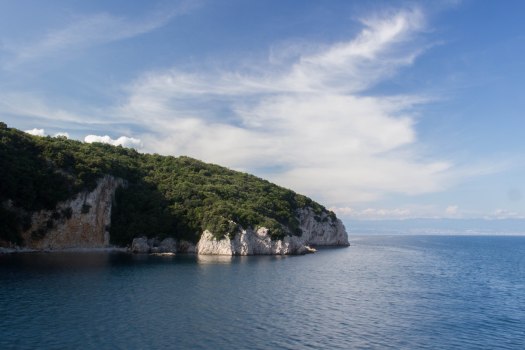 Porozina is a small village set a little above the ferry terminal, with its little shops and cafes, that almost hides from the hordes of tourists that come over on the boat amidst the forest. The main road to Cres Town turns away to the south, but our walking route to Beli takes us up a side road, through the village and then steeply up through the woods, following a rocky track. The way is tough, especially with our packs, but the trees shade us from the worst of the sun and the way, at least to start with, is easy to follow, little red and white target-like way markers are painted on the trees and rocks to keep us on the right path. Soon we have climbed enough for spectacular views to show themselves when we come to occasional clearings in the forest and we sit for a moment to rest and admire them. Wildlife is abundant all around us, especially many beautifully iridescent beetles. We see deer among the trees and hear more than see a number of grunting, snuffling wild boar.

Eventually we make it to the top of the ridge of low mountains that make up the island and start to make our descent. Checking the time, we realise that we have a chance of making it to Beli before nightfall and now that the going is easier we make a little more haste… and promptly get lost. The waymarks that had been so easy to follow are suddenly faded and indistinct and soon we lose them entirely. The map comes out and the compass with it while heads are scratched and various tracks pondered. Eventually we find our way back to the path and, followed by a gang of oddly sinister and persistent sheep, the rocky path between drystone walls gets steeper as we descend towards Beli. I’m beginning to wonder if I’m going to make it by now as I pick my way down the rocky tracks, ever conscious of the possibility of spraining an ankle (something I am annoyingly prone to) when suddenly through a gap in the trees I see the town clustered on its hill against the backdrop of deep blue sea ahead of us, its old stone walls and terracotta roofs glowing honey and gold in the evening sun. Spurred on, we walk to the edge of town and, following a sign, take the long, steep, sweeping road that spirals round the steep hill down to the small harbour at its foot. 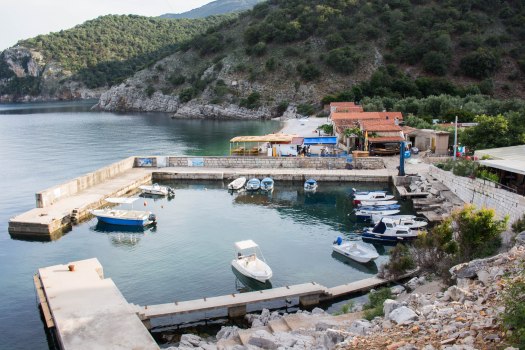 The reception for the campsite is closed. As we stand pondering this a German teenager sitting outside tells us that the campsite itself is closed “But.. you can camp. Just, no water. But there are toilets”. So the camping will be free, which is nice, but there’s no drinking water, which is less nice. We stumble about the campsite in the gathering gloom, failing to find a good spot to pitch our tents. After a while the German girl reappears and tells us that if we go up the hill and into the trees a little there are many places to camp and we soon find a good spot under a pair of olive trees that becomes our home for the next few nights.

There are two beach bars open at the harbour along with a diving centre, scuba diving being a popular pastime here, and we wonder at the campsite being closed, because it is packed and surely there is money to be made from all these campers. Exhausted, we repair to the bar staffed by a taciturn Herzegovinan gentleman who serves us, his only customers, some beers and goes back to watching a Swedish disaster movie on the enormous TV in the corner. The plot of the movie seems to revolve around a cliff-face that is in imminent danger of collapse into the Baltic which will produce a tsunami and flood a town. As the film reaches its climax and the waves crash into the lines of escaping Volvos, the heavens above Beli itself suddenly open with a crash of thunder and torrents of rain hurl themselves at the canvas roof of the bar. “Tsunami!” Says the barman looking up. How we laughed.

The next day the sun is out and we explore around a little. My friend goes further than me and busies himself clearing up plastic on a beach in a nearby cove while I snooze in my tent. That evening we climb the road back to the town and indulge in the most amazing fish platter for two at one of the local restaurants, followed by the traditional offering of home-made flavoured schnapps as we pay the bill and chat with our friendly host. 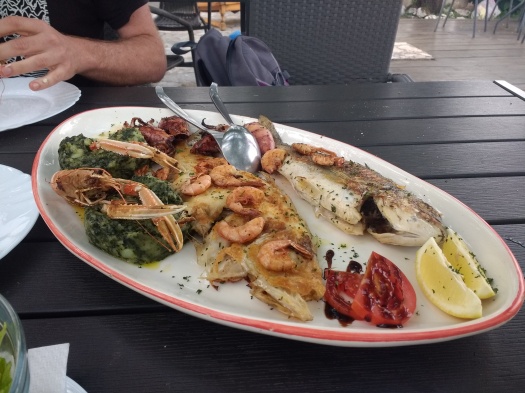 The day after we spend mostly splashing in the sea. Or I do at least. My friend is back to his eco-warrior beach clearing. The clear waters are teeming with fish and above us circle one of the things this island is famous for. There is a colony of griffon vultures just along the coast here and we see several over the course of the afternoon. Once common over much of Europe, changing sheep farming practices have seen their numbers severely reduced and they are now protected. Sadly the tourist boats throw rocks at the birds nesting on the cliffs to get them to fly, which leads to many juveniles falling into the water and drowning. Up by our restaurant there is a rescue centre occupying a former school built during the island’s period of Austro-Hungarian rule.

It is difficult, now, to make a living on the island and many of the houses are empty of permanent residents, holiday-makers now dwell in them in the warmer months. There are no longer children enough in Beli to keep the school open and those that are left are taken by bus to Cres Town for their education. The school bus is the only public transport on the island and it leaves Beli at 7.15am, so we find ourselves slogging back up the hill to catch it far earlier than we would have liked to rise, for we must get to the city of Rijeka on the mainland to catch the coach back to Ljubljana and our flight home. It’s good that there aren’t more tourists wanting to make the journey, because there are only two spare seats on the minibus, which makes its way along extraordinary precipitous, winding lanes to the island’s beautiful capital. 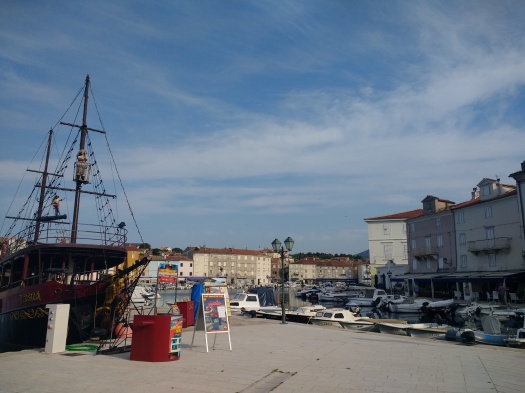 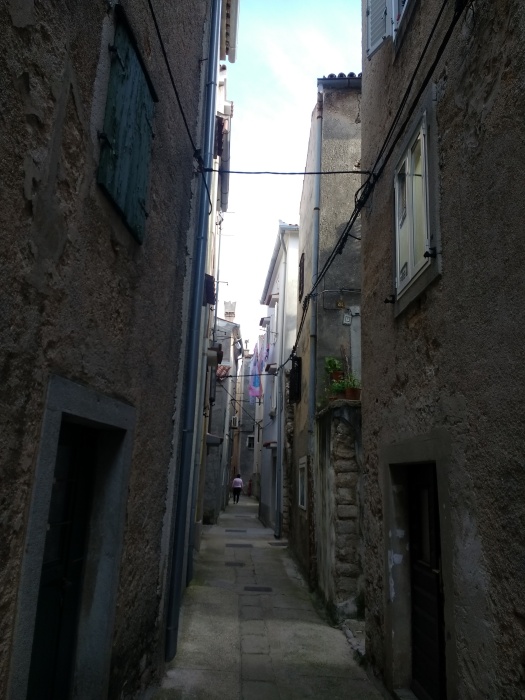 In Cres Town we have only an hour or so to explore the warren of narrow alleys between tall, crumbling houses before our passage, in the form of a catamaran, to Rijeka arrives and whisks us back to the real world of cities and buses and airports. As we leave, we both say that we will come back one day to see more and, if we’re really lucky, taste that wonderful seafood platter beneath the grapevines on the terrace overlooking beautiful Beli – which will live in my memory – once again.