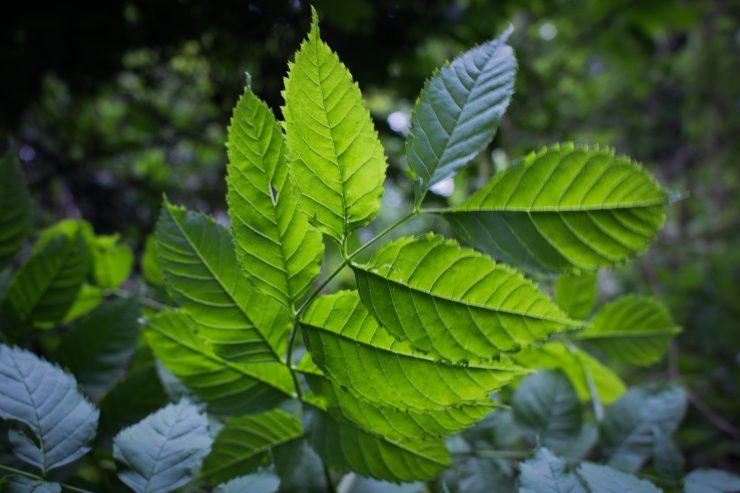 Another of Britain’s biggest trees, similar in stature to the Oak, is the Ash. Its limbs are straighter, its shoots burst from the parent branch in strangely geometric opposite pairs and its frond-like leaves seem almost alien in this land of broadleaves – almost as though some survivor of a more ancient age still stands among us. Like the Oak it is a large, heavy-limbed tree with deeply fissured bark. In many cultures it is seen as protective and nowhere more so then in Norse mythology where the World Tree Ygdrassil is an Ash tree found on an island in a lake containing the World Serpent. Ygdrassil was so mighty it reached from the depths of the lake to the very heavens, its limbs reaching out over the world it protected and its trunk providing a means of transport between the Nine Worlds with messages borne by a squirrel from the serpent at its base to the eagle high in its crown. The rivers of the world flowed from the antlers of a deer which ate Ygdrassil’s leaves. The Anglo Saxons knew the Vikings as the “Aescling” or Men of Ash.

In British folklore the tree retains its protective qualities. It is often seen as protecting the purity of wells and a spoonful of ash sap would be given to newborn babies to ensure good health. If a child became ill, a cleft would be made in an ash tree and the naked child would be passed through, the cleaving being bound after the event, so as the child healed, the tree healed with it and the two became linked for life.

Ash was one of the most-worked trees in the woodlands of old. Preferring the less acidic soils it grows with enormous vigour, growing quickly and in great proliferation. Indeed it is often seen as something of a pest. Its wood is strong and flexible, giving it a vast range of uses for the woodsman and carpenter alike. Shepherds used it to make their hurdles to contain their sheep, joiners used it to make frames (it was said a joint of ash wood would bear more weight than any other) and its elastic nature made it the first choice for many tool handles, especially for axes; the natural give in the wood absorbing the shock of repeated blows as a tree was cut down or logs split. Wheelwrights prized Ash for use as the fellowes, or rim of the wheel, its forgiving properties allowing it to ride over rough terrain without splitting. Axles were also made from Ash because of this.

The Latin name for Ash is Fraxinus, which means “firelight”, but unlike Oak which was associated with cataclysmic fire from the skies, the fire of the Ash was often a far more domestic affair, it being known to be the best firewood, even to this day. It will burn green or seasoned and burns well for a long time.

In times of war spears and arrow shafts and sometimes even bows were made from Ash. Indeed a poetic Anglo Saxon name for a spear was “aesc”. Both Odin and Thor had spears made of Ash.

Ash was often coppiced and this can continue a tree’s life almost indefinitely, the stools growing to considerable widths. If not coppiced the trees would be left to grow to full maturity before being cut for use in the many ways described above and more. Our ancestors must have been in awe of this most useful of trees and it is possible to imagine how such a tree could become seen as a great protector as in very real ways that’s just what it was.

In 2012 a fungus called Chalara and also known as Ash Dieback was found in the UK for the first time. It had been widely known across Europe since 1992. The fungus causes lesions in the bark, the death of leaves and the reduction of the crown of the tree. Once a tree is infected it is usually fatal, either the tree loses so much of its leaves it is no longer able to photosynthesise, or it is so weakened it can be killed by other pathogens. Already over 90% of Ash trees in Scandinavia have been killed and similar numbers are expected to die in the UK. However, ash grows so rapidly and so freely there are high hopes that even after such a strong attack, tree numbers will eventually recover from naturally resistant stock. Let us hope so. After all, how will the Gods move between the Nine Worlds if Ygdrassil is dead?