Somewhere to the north of Fittleworth in the Greensand Hills of West Sussex there lies, lost in the woods, a tiny, tiny little place that goes by the name of Bedham. The place is so small that it didn’t have its own church or school until late in the 19th century and when they were built, they were both in the same, small building – built out of brick and the local, golden sandstone. The little school/church didn’t last very long and now stands as a maintained ruin, lacking its roof and the lean-to side buildings that once stood. The walls have been prevented from falling into further decay with repointing and steel girders to hold up the precarious bell-cot. 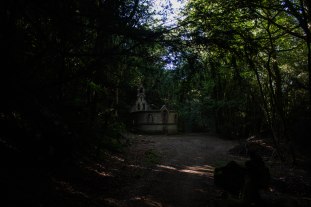 I have tried to find out if there is a single name for these woods, but the internet is, thus far, silent on the matter. They stretch north from Bedham including areas with names like Hammonds Wood, Hoghurst Copse and The Mens. There are huge, ancient trees here including some glorious, vast, coppiced beech whose great boughs have grown over the thousand-year ghosts of the people that first cut these trees and harvested their wood.

There are paths and tracks through the trees – some easier to follow than others – but to make a circular walk out of it I struck away from the path and followed, as best I could, the streams to get back to the car. The day above the canopy was bright and warm, but I walked and scrambled in the cool, eons-long gloom of the trees. The gloom of the woods that becomes a portal to an older world. A gloom that has persisted in smaller and smaller pockets since the ice retreated 9000 years ago and the great primeval forests that once covered this land first grew. These are the woods that humans found when they first came back to Britain and where they made their homes. This is where they cut the trees and made their clearings and knew that the woods that surrounded them held both essential assets and hidden dangers. Boar and wolves and bears once lived in these woods and to leave the clearing was a dangerous, but necessary pursuit. European folk tales are filled with stories of woodland as a transitional, transformative landscape: somewhere the young girl or boy can go and be changed. They may not come to a good end, or they may triumph over whatever lurks behind the the trunks of the mighty beeches and in the thickets of holly: but whatever their fate you can guarantee that they will not be the same when they emerge once more into the human world of light and order.

As I walked I followed tracks made, not by humans, but by other path-finders of the forest – mostly deer, of which I saw several – always bounding gracefully out of sight before I could bring my camera to bear on them. The old human paths are, mostly, gone. Even some of the ones marked on the map have faded as the trees take back their gloom; but there are other clues here that speak of labouring men and women in years gone by. There are medieval wood banks here, built to mark the edges of properties, and coppiced beech with some hazel stools stand testament to lives at which we can only guess.

And deep in the woods there were surprises. A shelter built far from the nearest path. A clearing containing a shepherds’ hut. A bridge over one of the deeper ghylls – broken and twisted by the floods of winter, but still crossable with care. 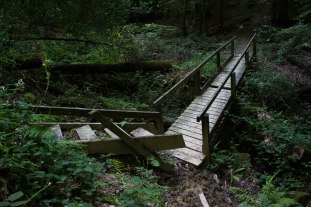 There is always such a powerful feeling of walking among the fallen and disappearing past when you walk in these old woods. Some of these trees have long memories, but not so long that the old ghosts of past millennia won’t, in the end, pass fully away and be forgotten even by the ancient beeches – once kept alive by coppicing, they now grow old and fall in a ruinous, rotting confusion of limbs. An ancient way of life is passing from us. The spirits these trees once held have flown, only to be remembered by the few who care to know what our ancestral explorers, clearers and farmers once worshipped.